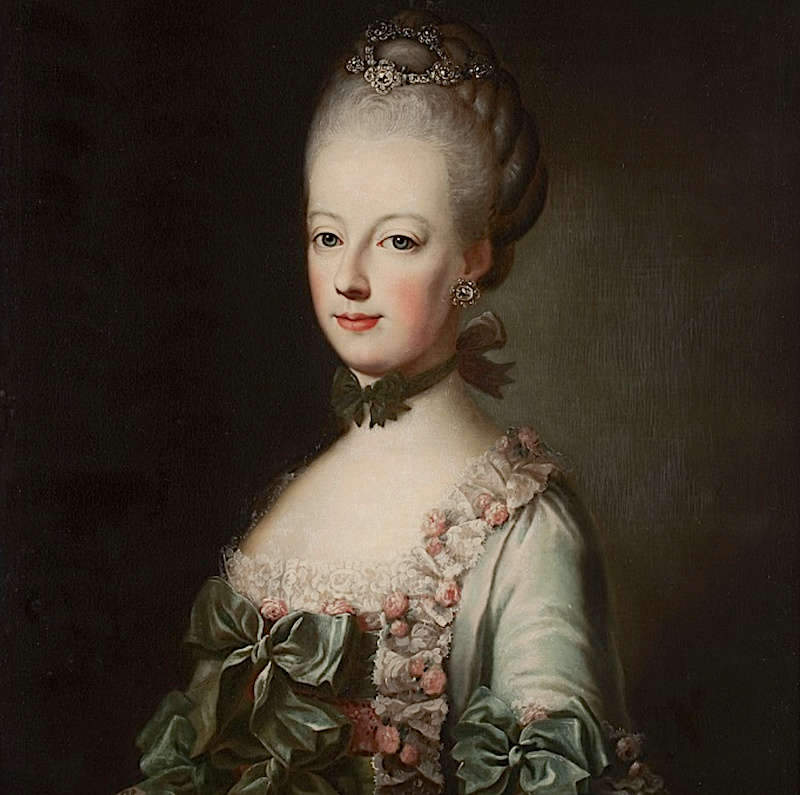 The exhibition brings to the U.S. examples of Japanese lacquer boxes from the collection of Marie-Antoinette, part of a significant exchange between the Getty and Versailles

Marie-Antoinette (1755-1793) possessed one of the finest collections of Japanese lacquer boxes in Europe and counted them among her most cherished possessions. 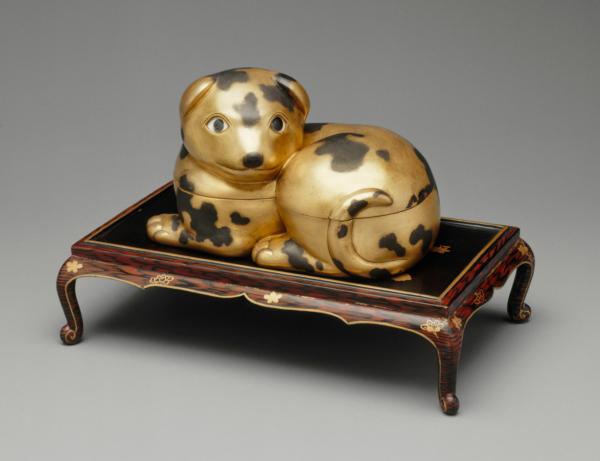 When Empress Maria Theresa of Austria died in 1780 she left her collection of 50 small Japanese boxes to her daughter, Marie-Antoinette.
The French queen had her private sitting room in Versailles, the cabinet doré, redecorated specifically to showcase these precious pieces.
Over the next eight years she added about 30 pieces to the collection. 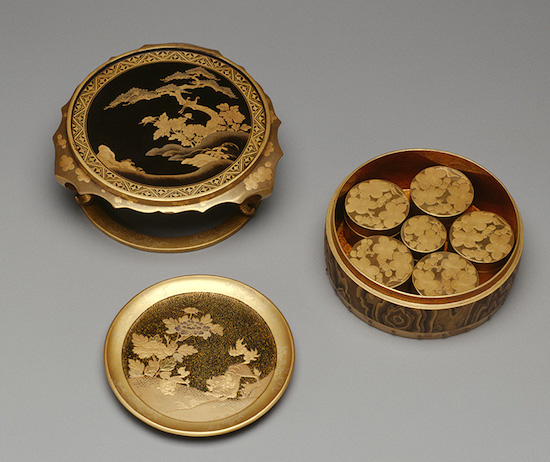 When revolutionaries forced the royal family to leave Versailles for Paris in 1789, the queen asked a trusted art dealer to inventory and pack up the lacquer boxes. The boxes were safely preserved in Paris and, after Marie-Antoinette’s execution in 1793, transferred to the state.

All of the boxes in the exhibition are Japanese, from the mid-Edo period (late-17th to mid-18th centuries).
Marie-Antoinette and the French aristocracy’s taste for objects from East Asia was very fashionable during the 18th century. At the time, works of Asian lacquer and porcelain were imported into major European cities and sold by art dealers to distinguished clients throughout Europe. 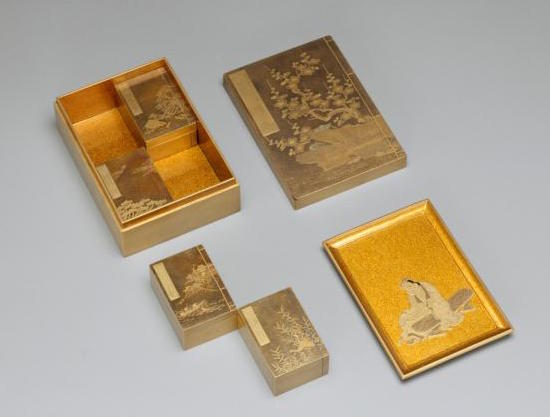 Marie-Antoinette likely did not keep anything in her treasured boxes, although many of them were intended for specific uses.
For example, one of a pair of elaborately decorated boxes on stands features an ensemble of four small, square boxes for storing incense.
Many of the endearing Japanese lacquer boxes displayed are shaped after other objects or animals, including fans, musical instruments, a melon, and a hen. 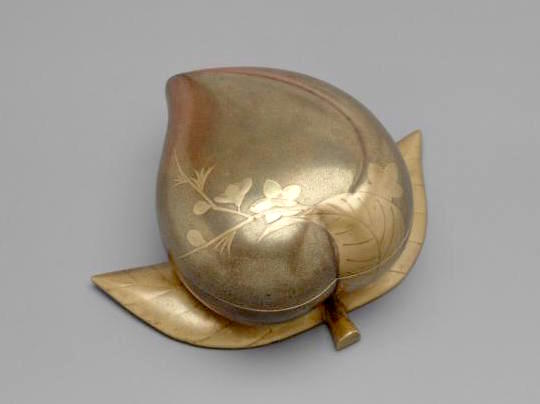 The loan of these boxes is part of an exchange between the J. Paul Getty Museum and Versailles.

The Getty Museum owns an important desk that the queen ordered for her husband, King Louis XVI.
The desk, made by her preferred cabinetmaker Jean-Henri Riesener in 1777, has been on long-term loan to Versailles and displayed in the room for which it was made in the Petit Trianon since 2001. 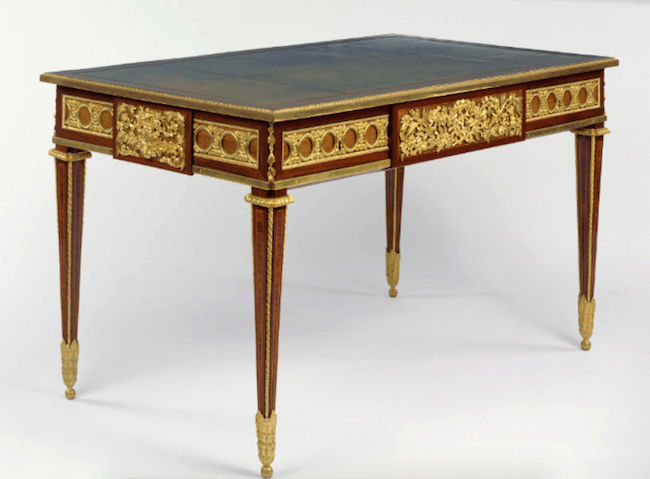 Bureau Plat, Jean-Henri Riesener
French Crown, Garde-Meuble de la Couronne
Ordered by Marie-Antoinette for the cabinet of Louis XVI in the Petit Trianon and delivered on August 6, 1777, transferred to the queen's personal garde-meuble by 1784.
Photo : http://www.getty.edu/art/collection/objects/5440/jean-henri-riesener-bureau-plat-french-1777/ 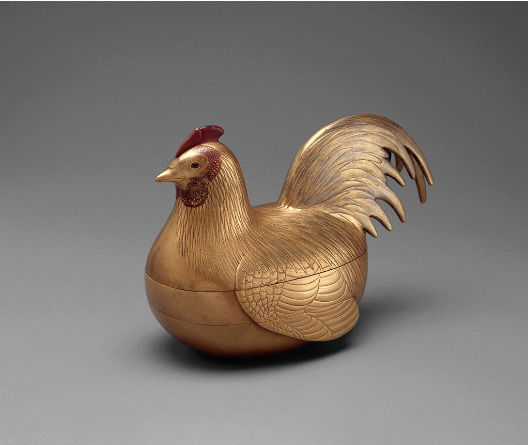 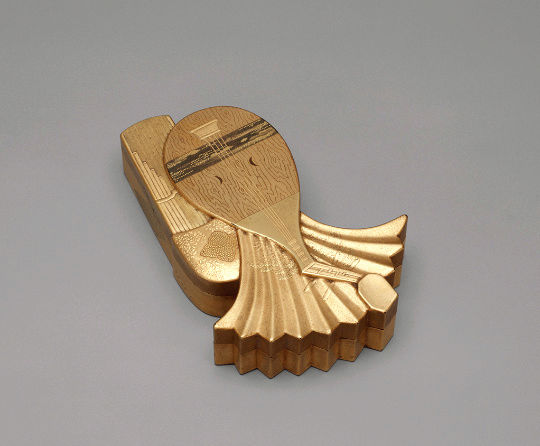