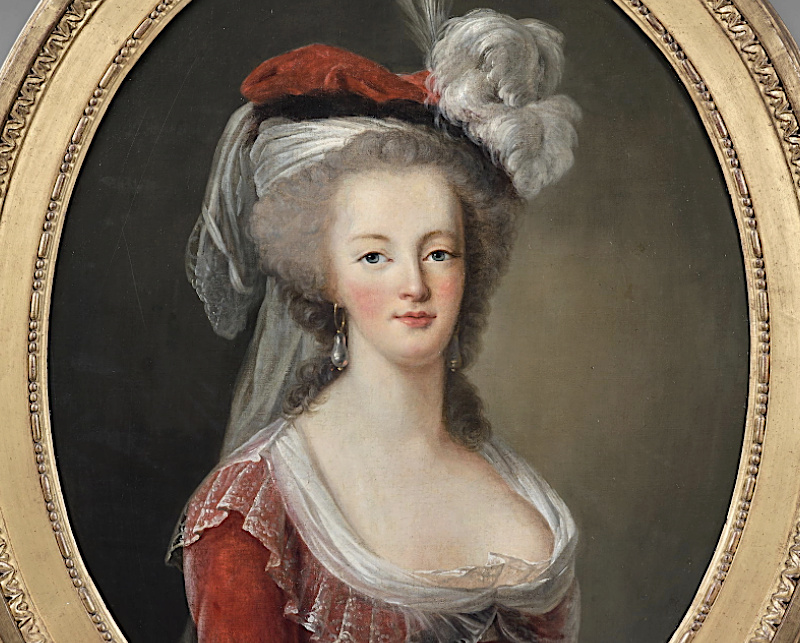 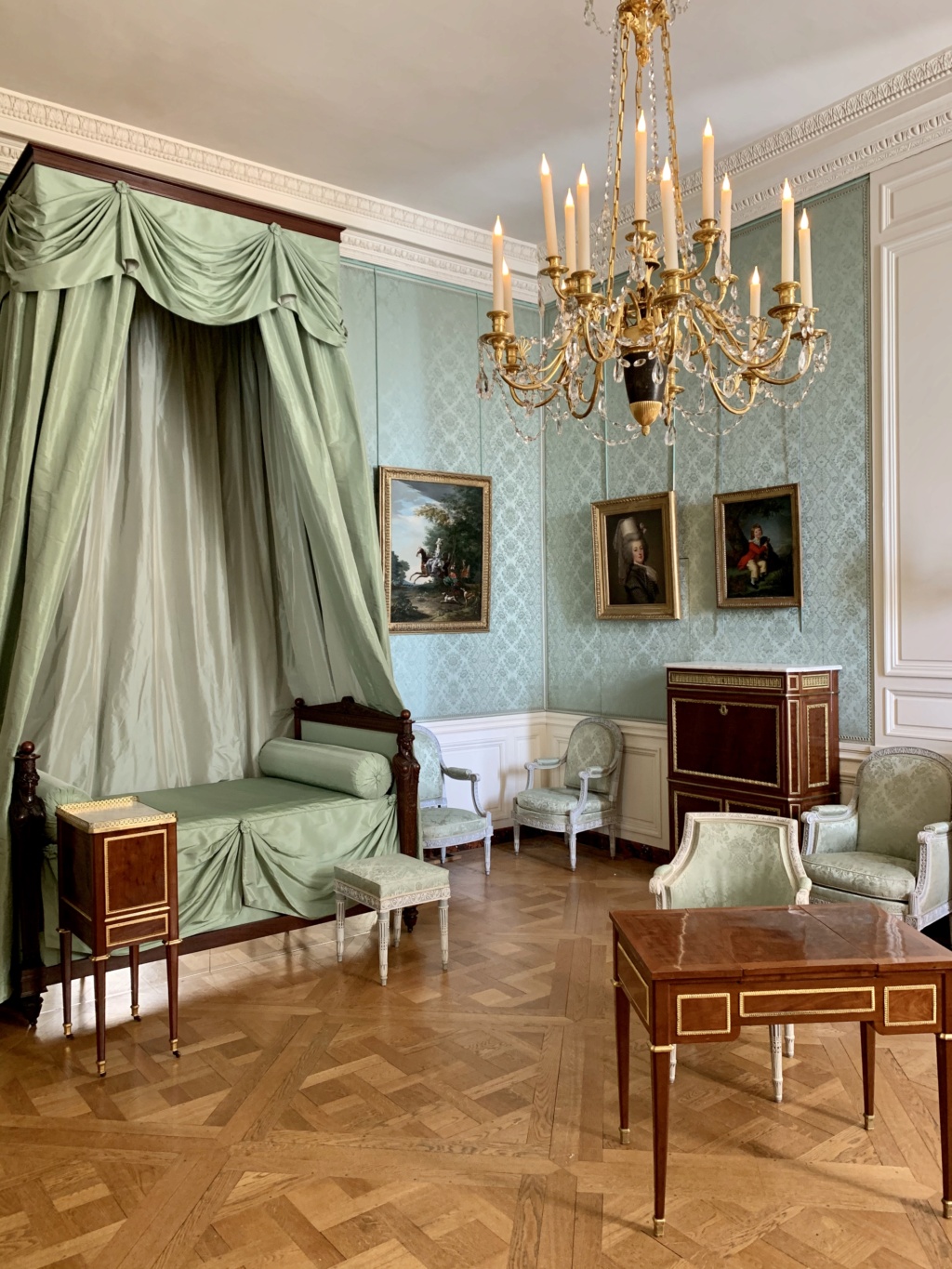 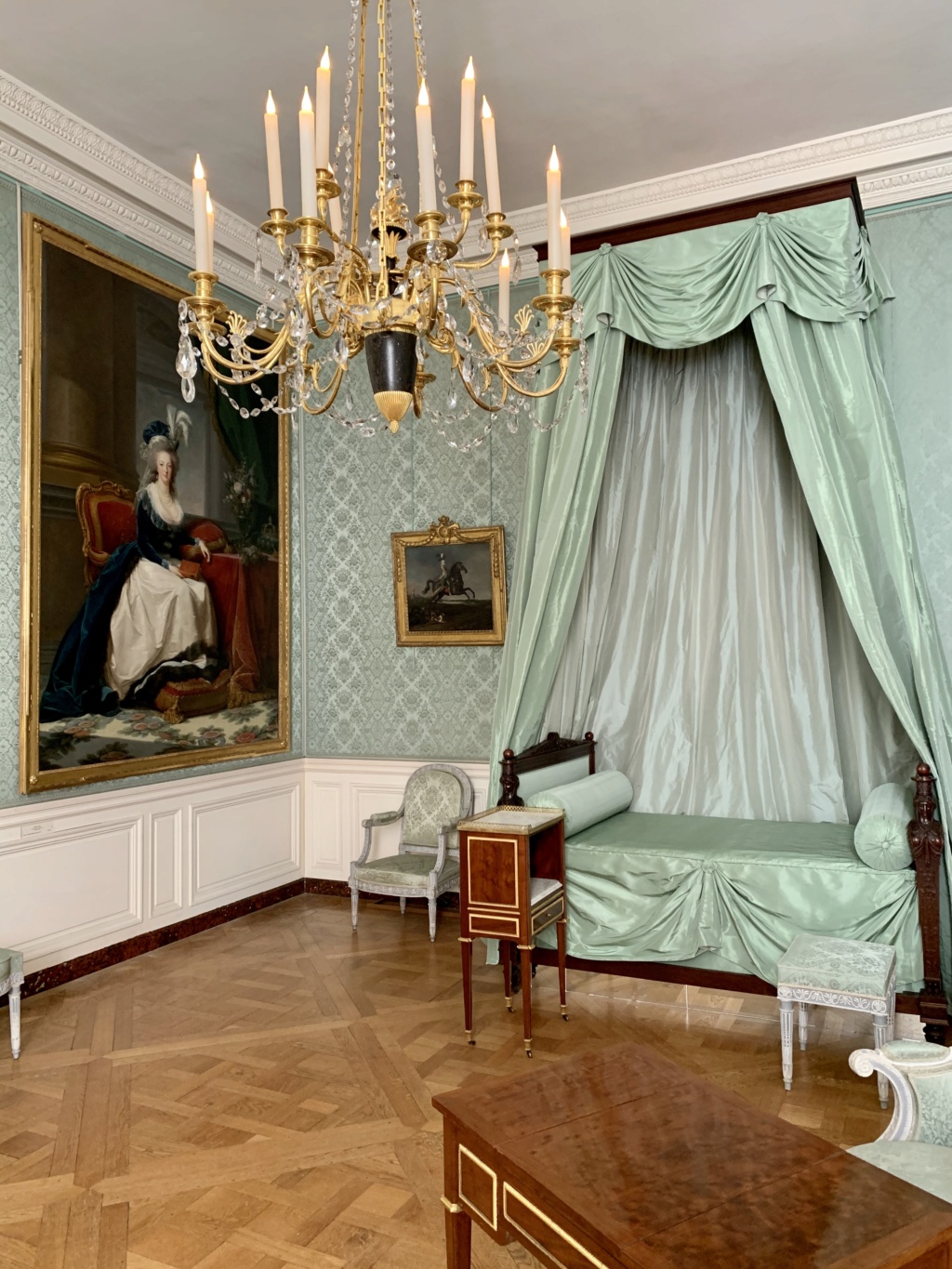 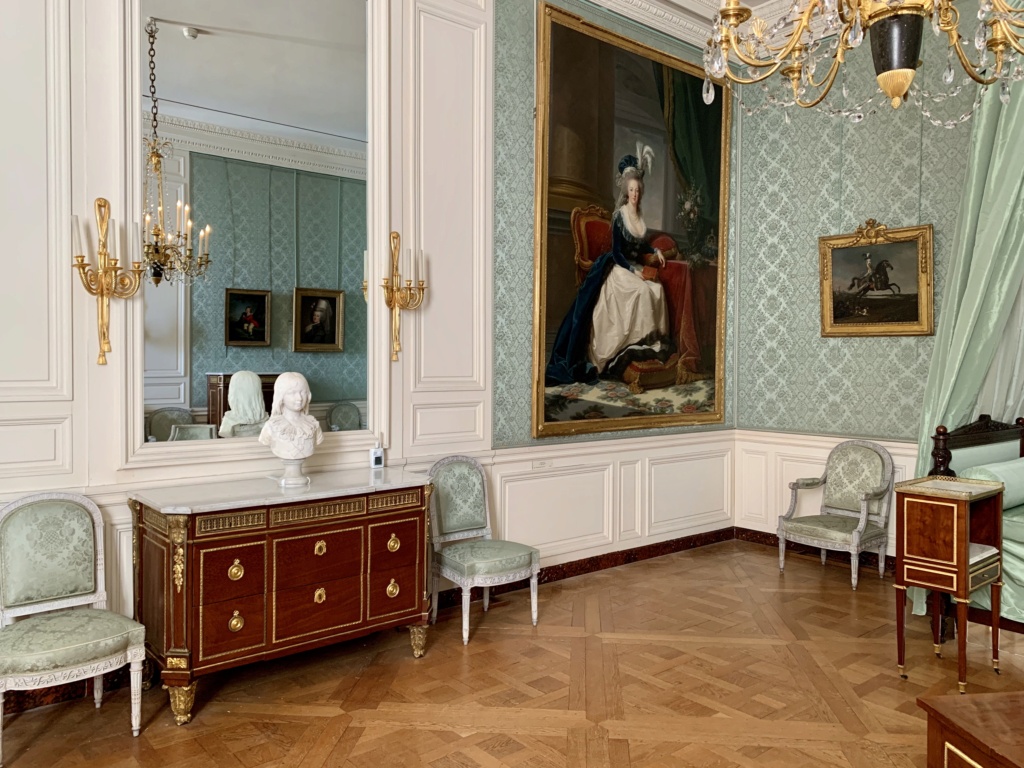 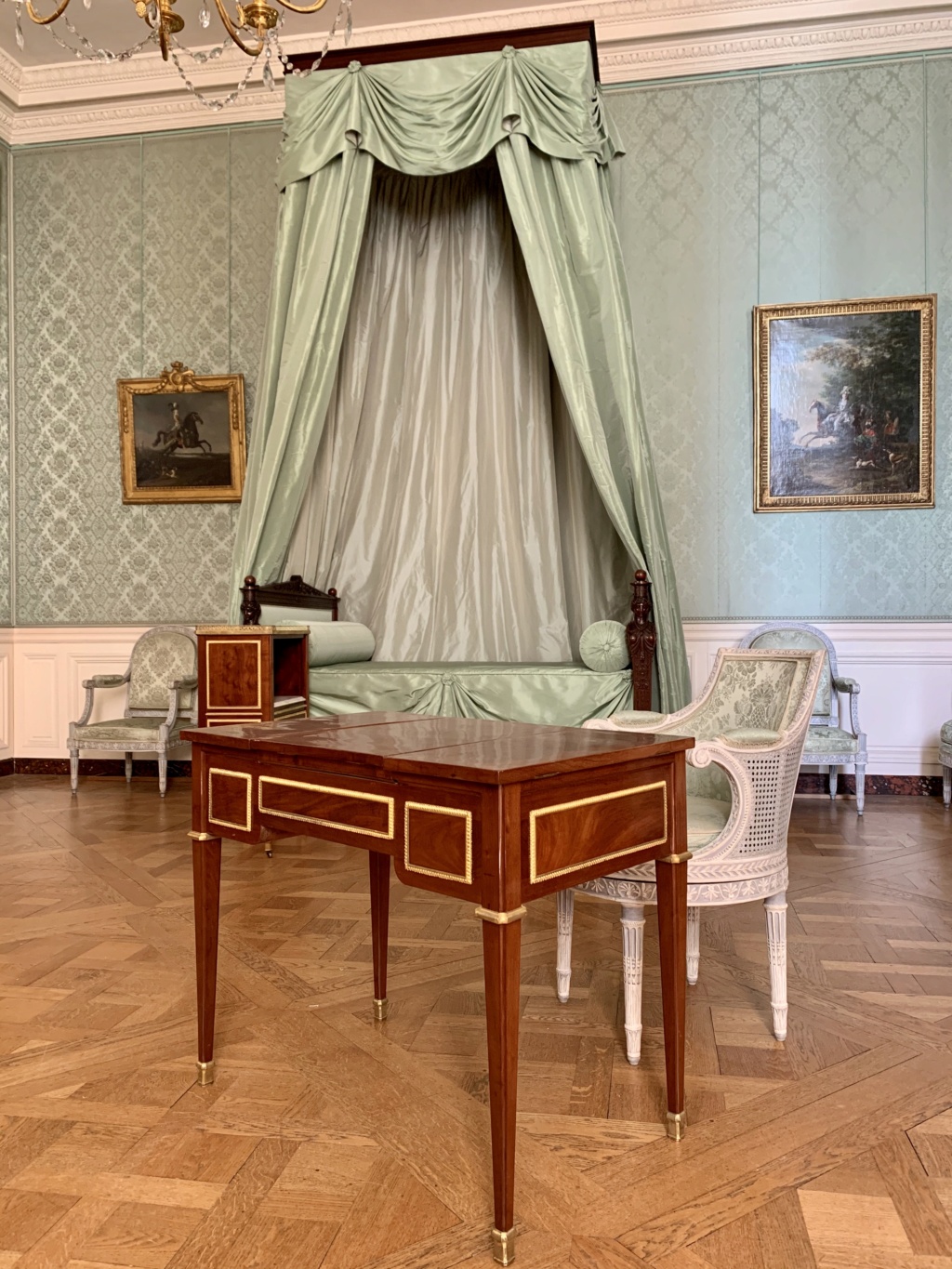 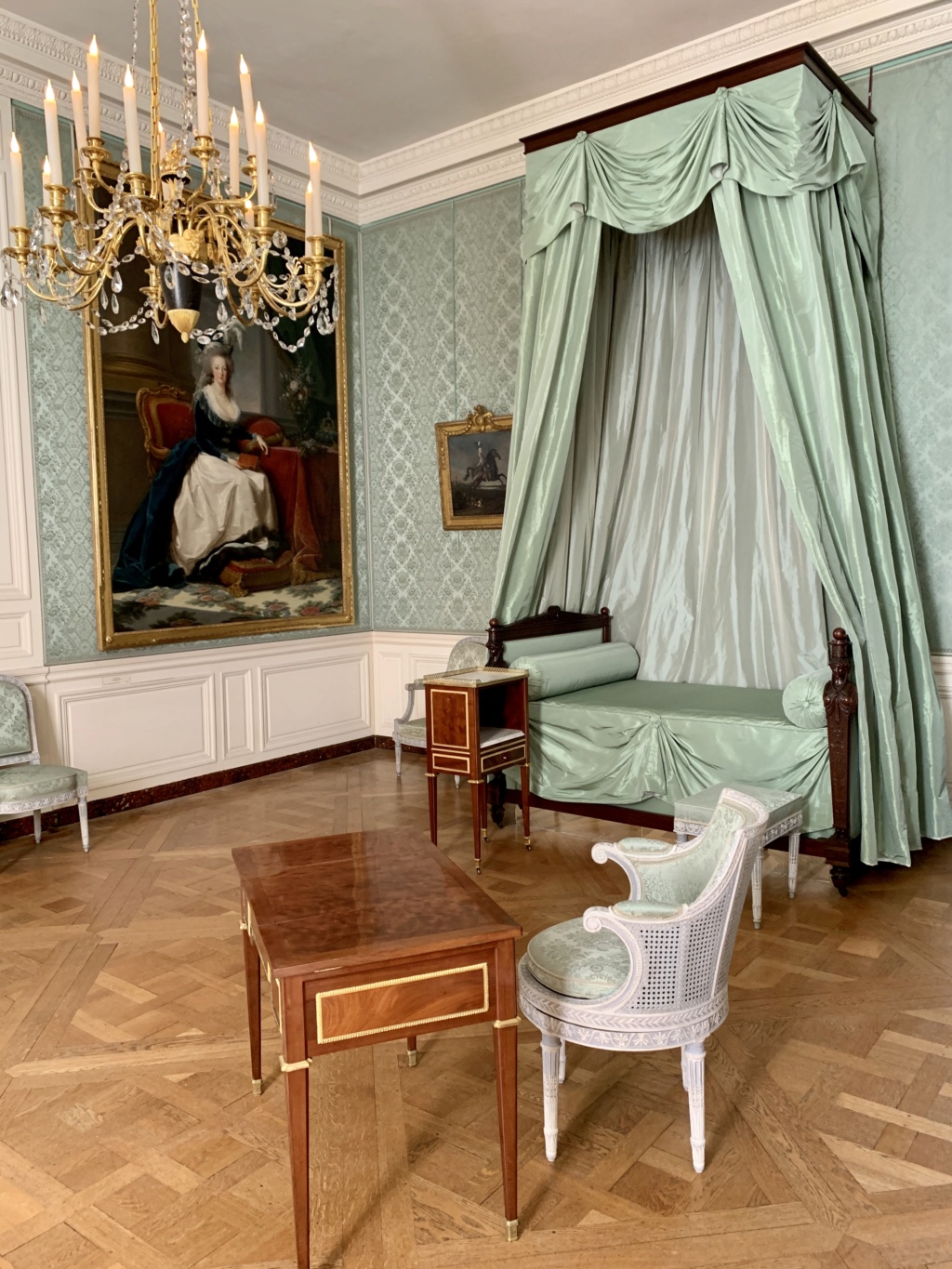 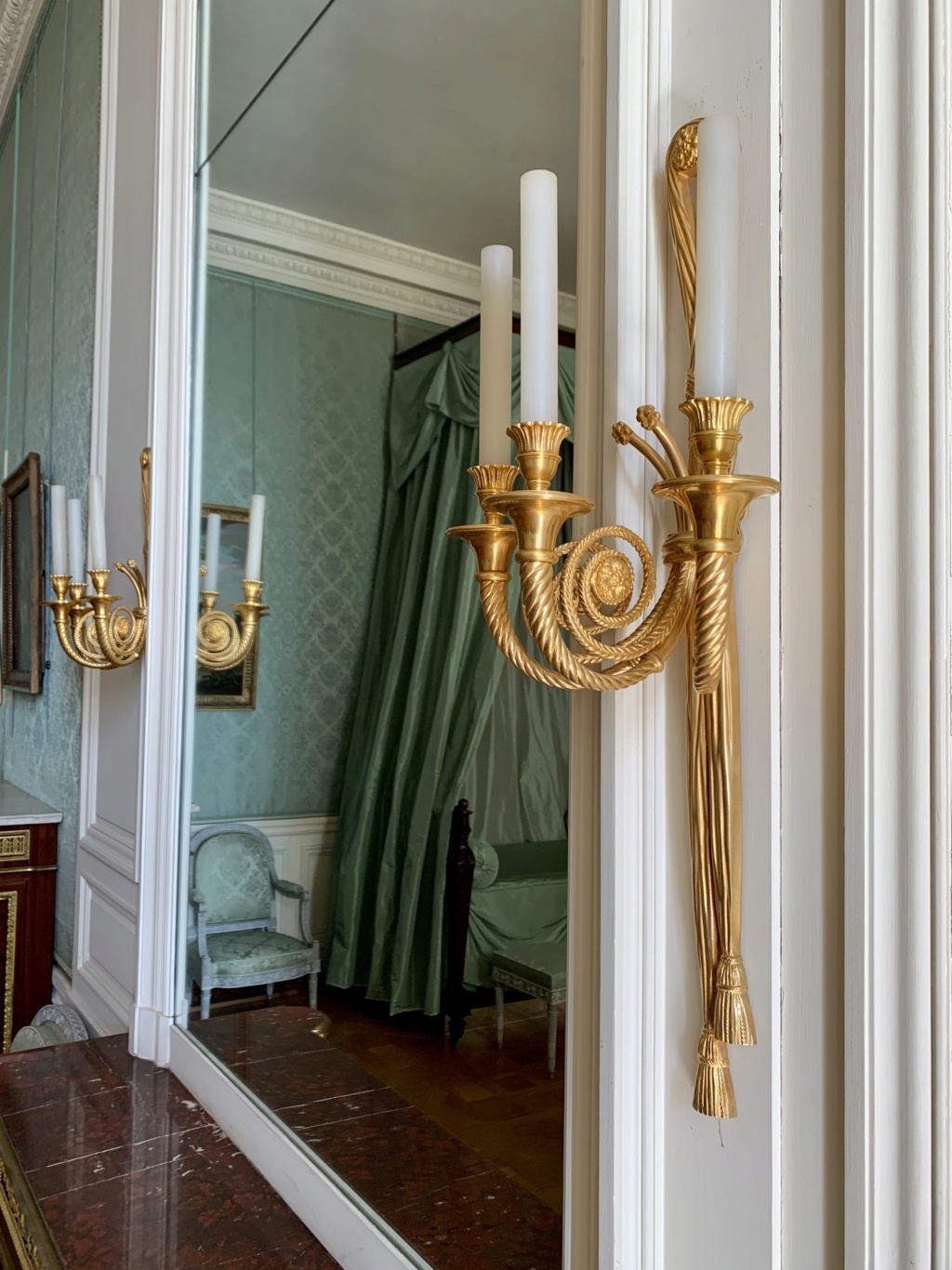 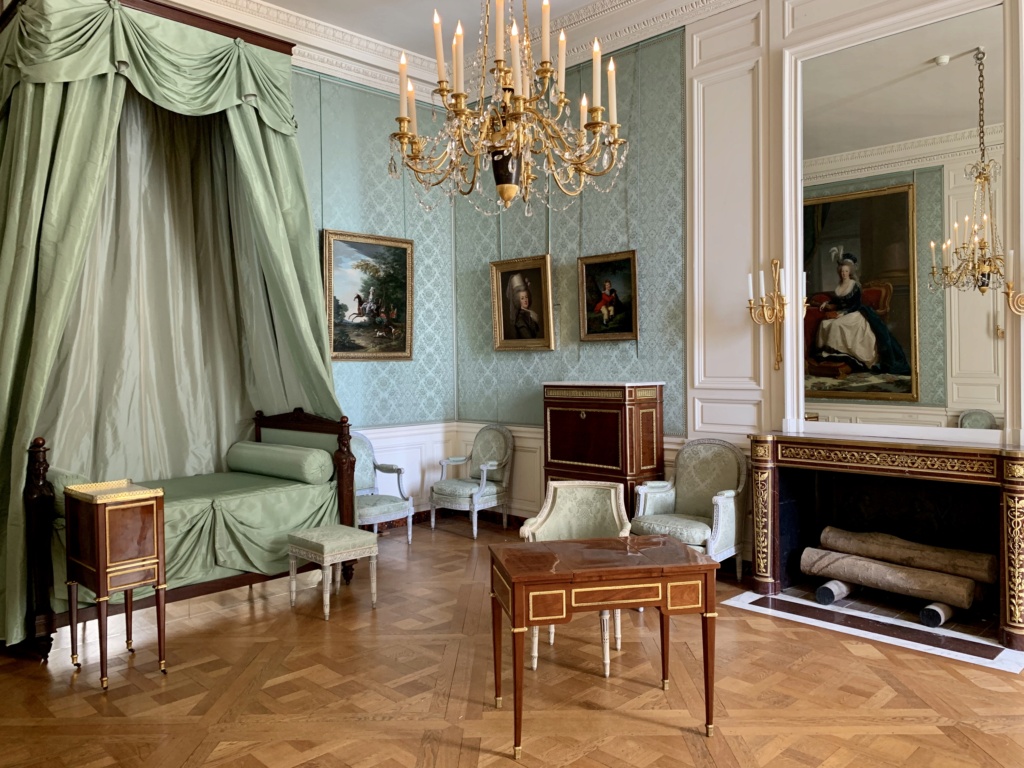 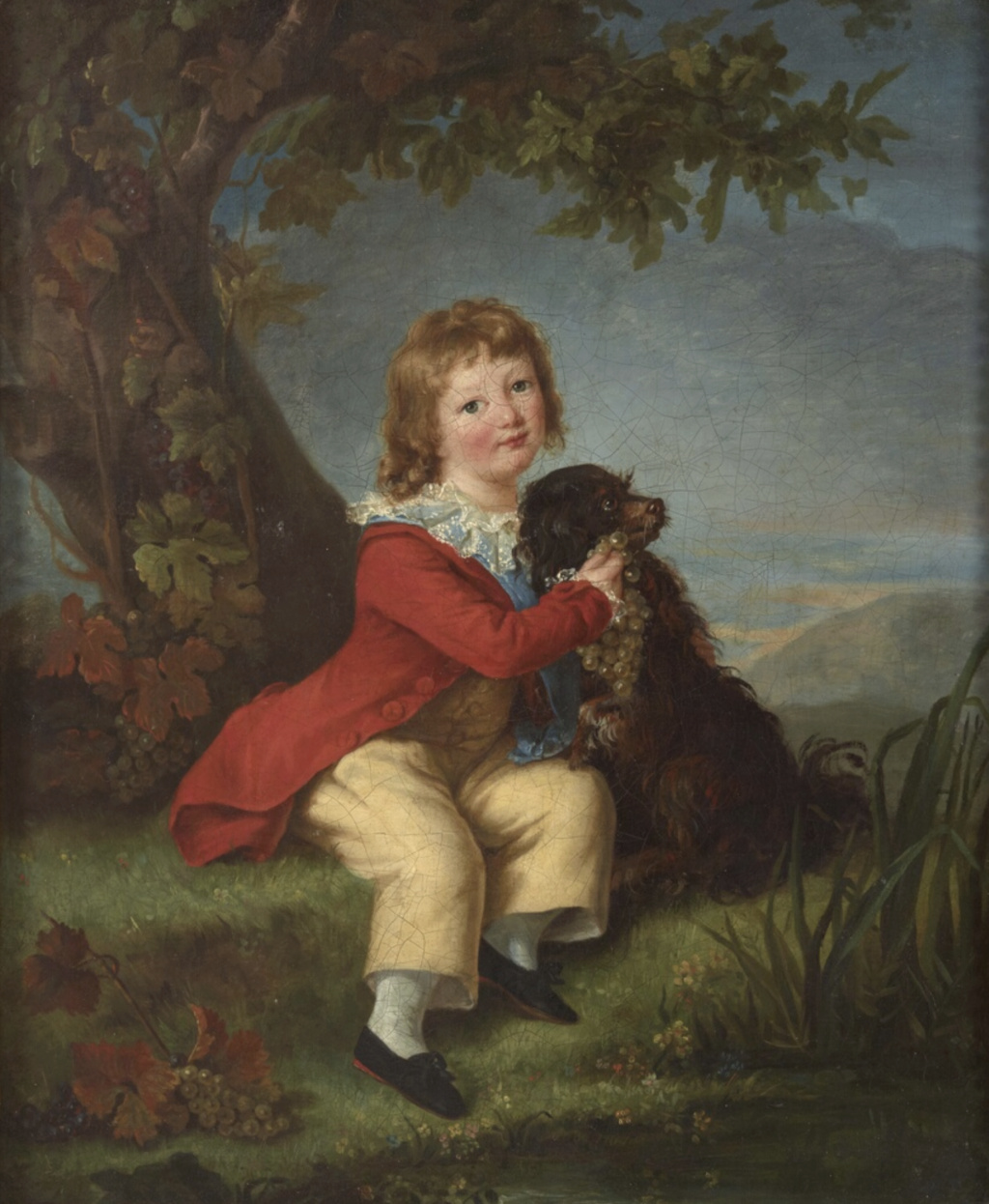 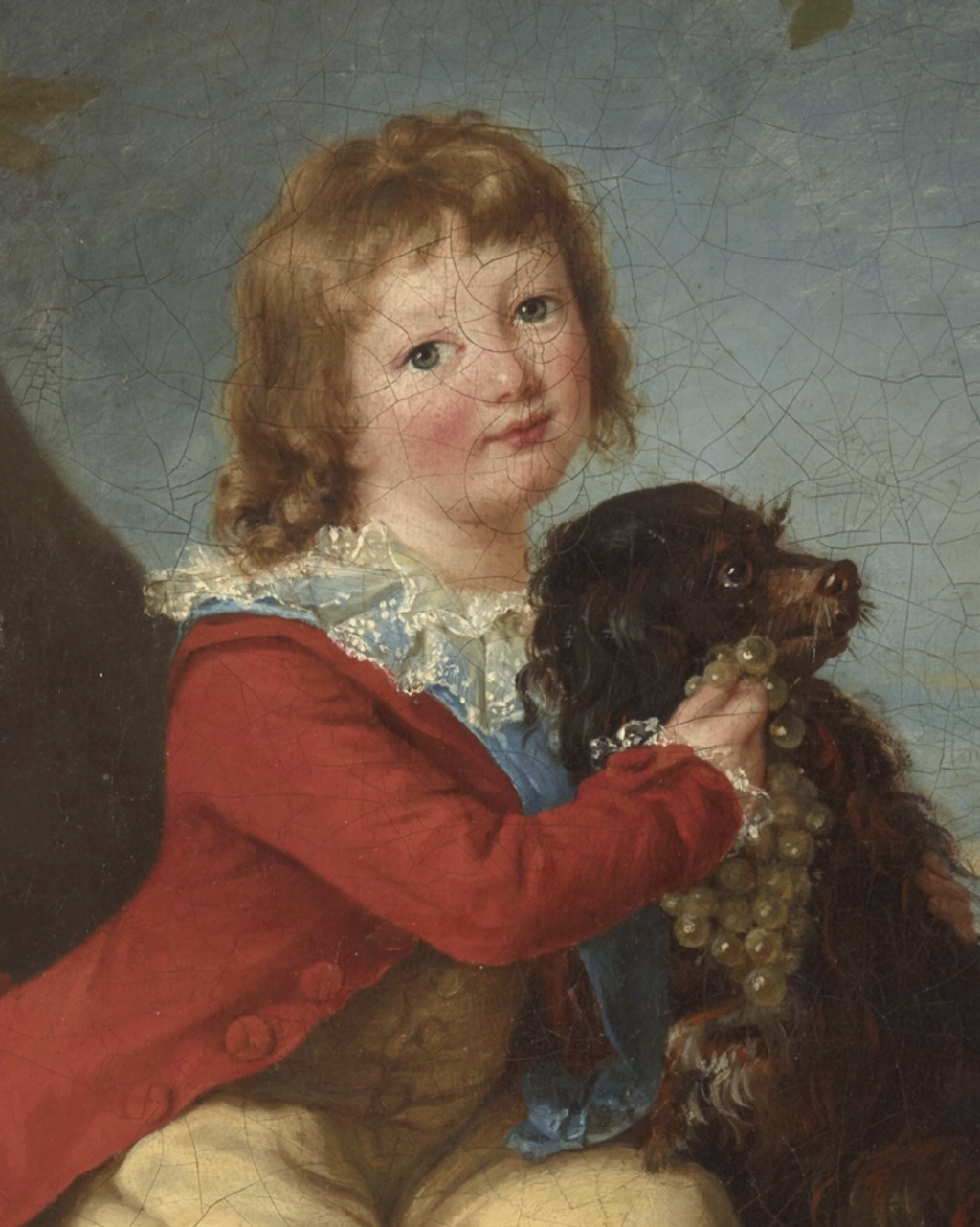 A royal Louis XVI giltwood fauteuil
By Georges Jacob
Supplied for the petit appartement de la reine at the château de Versailles
Circa 1788, gilt in the early 19th century
Carved overall with palmette motifs à l'étrusque, the arched back above heart-shape and pearl and husk-fluted arms terminating in scrolling foliate and rosette scrolls on downsweeping channelled and beaded supports supported by semi-columns surmounted by rosettes, the seat-rail conformingly carved, on stop-fluted turned and tapering legs wrapped with foliate collars and headed by palmettes, the padded back, seat and arms upholstered in associated pale green silk, stamped 'G IACOB', later gilt in the early 19th century, with losses revealing the original white and grey-painted decoration underneath
37. 3⁄4 in. (96 cm.) high; 26 in. (66 cm.) wide; 25 in. (64 cm.) deep 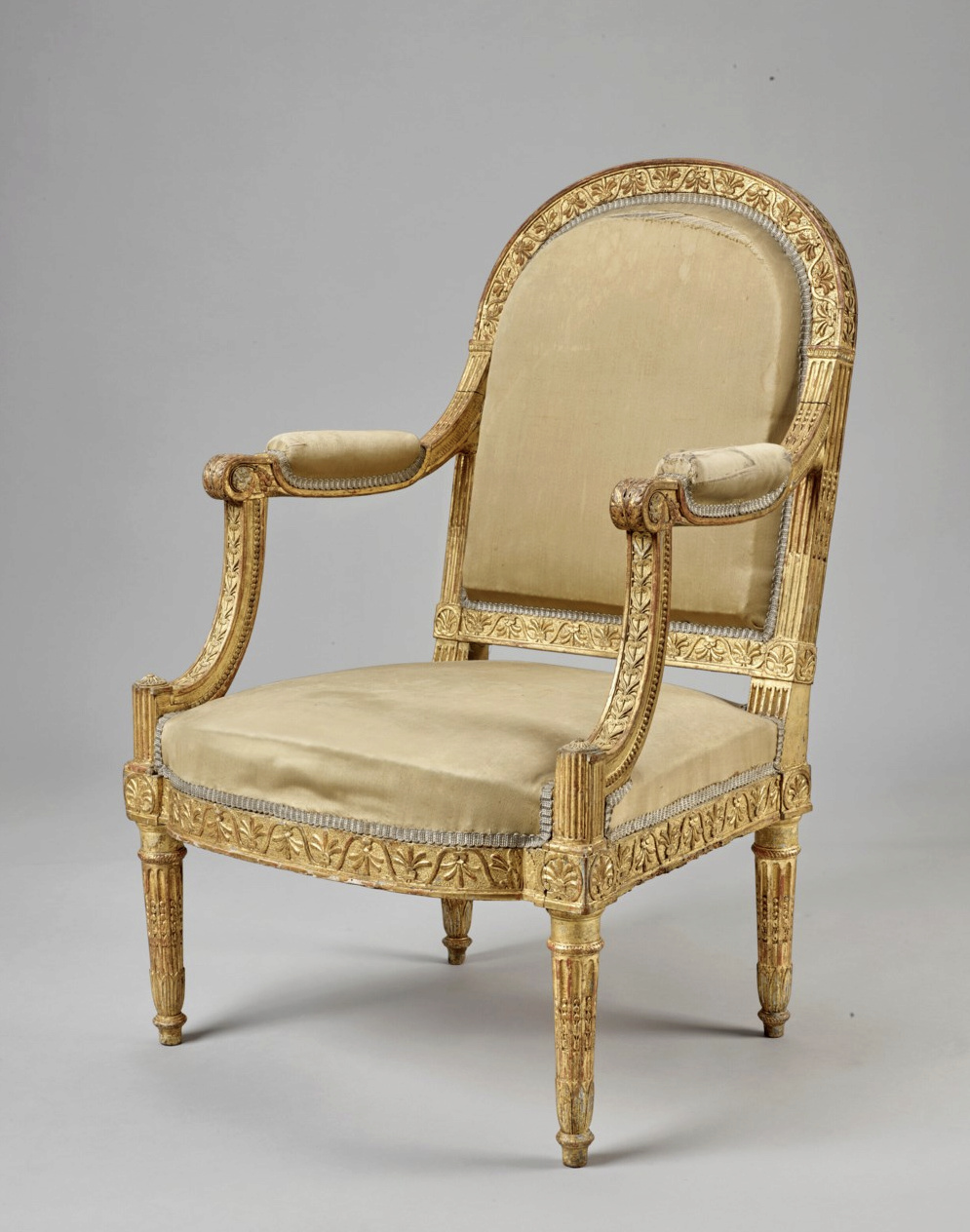 Delivered in 1788 to Marie-Antoinette, Queen of France, for the chambre à coucher of the petit appartement de la Reine, château de Versailles.
Sold during the Revolutionary sale on 27 December 1793 (7 frimaire An II) to Citoyen Dumont for 3000 livres.
Private Collection.

A true masterpiece of French neo-classical menuiserie, this finely carved fauteuil 'à l'étrusque' was part of the last recorded commission supplied by the celebrated furniture-maker Georges Jacob to the Queen Marie-Antoinette in 1788.

In her quest for a larger and more private apartment on the ground floor of the château de Versailles which would enable her to be closer to her children, Marie-Antoinette was granted those of Louis XVI's aunt, Madame Sophie, after her death in 1782. 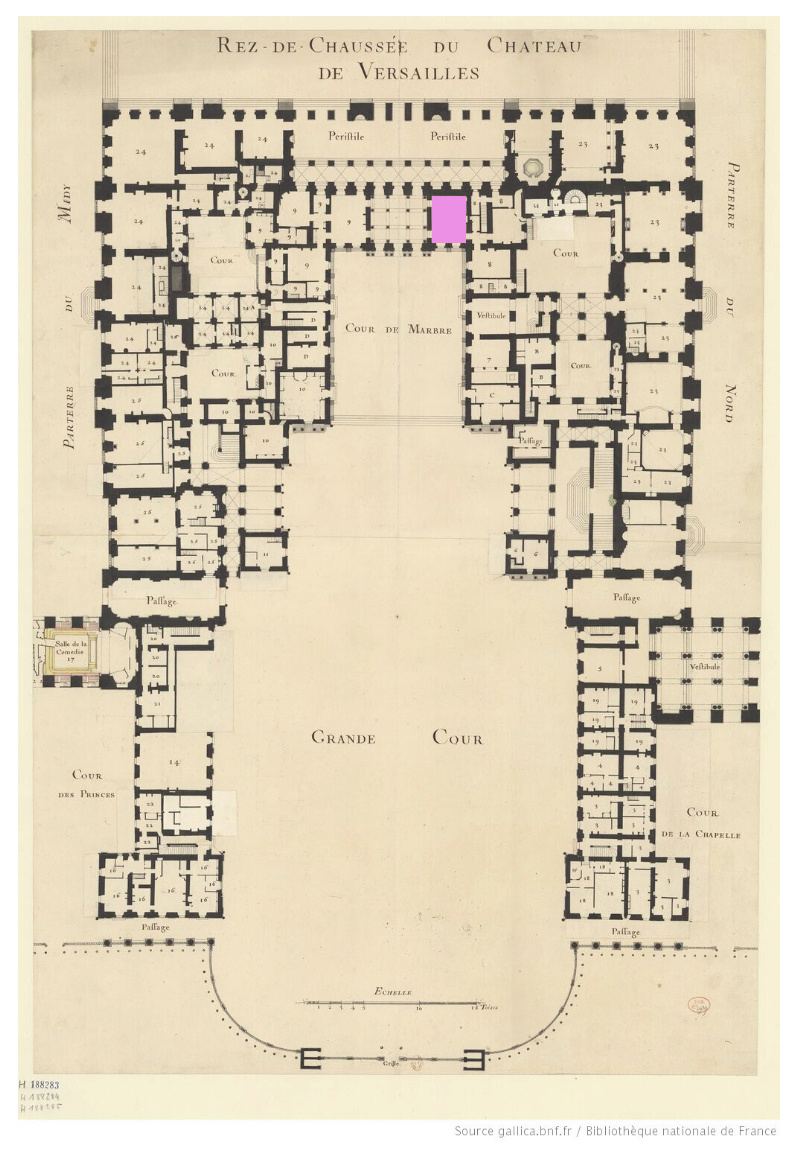 Comprising three rooms, the refurbishment of this luxurious apartment, overlooking both the cour de marbre and the grand canal, began in November 1783. Pressed for time, the ‘mobilier de Couches’ which served for the birth of Madame Royale and the premier Dauphin was re-used, and it was only in 1788 that Marie-Antoinette commissioned an entirely new suite of furniture designed in the latest taste. The new bed was in mahogany and the seat furniture was made of beechwood painted in white and grey. 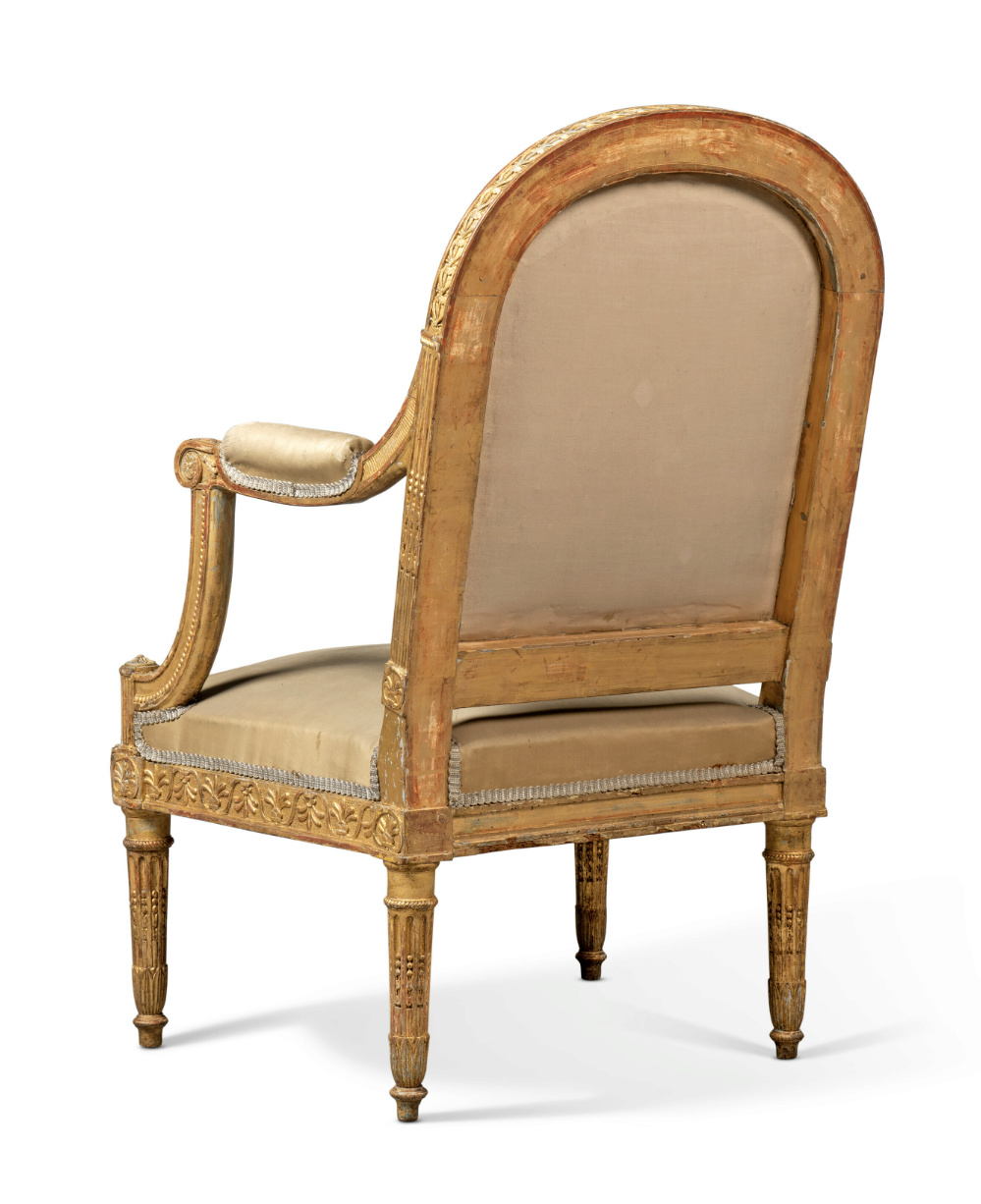 With their large palmettes, Vitruvian scrolls, pilasters and columns, the set was designed in the ‘Etruscan’ manner, a style developed at the end of the 18th century and popularised in France by the painter Hubert Robert (1733-1808). This style was inspired by archaeological objects excavated in southern Italy in the second half of the eighteenth century which were incorrectly believed to have been made by the Etruscans at the time of their discovery. 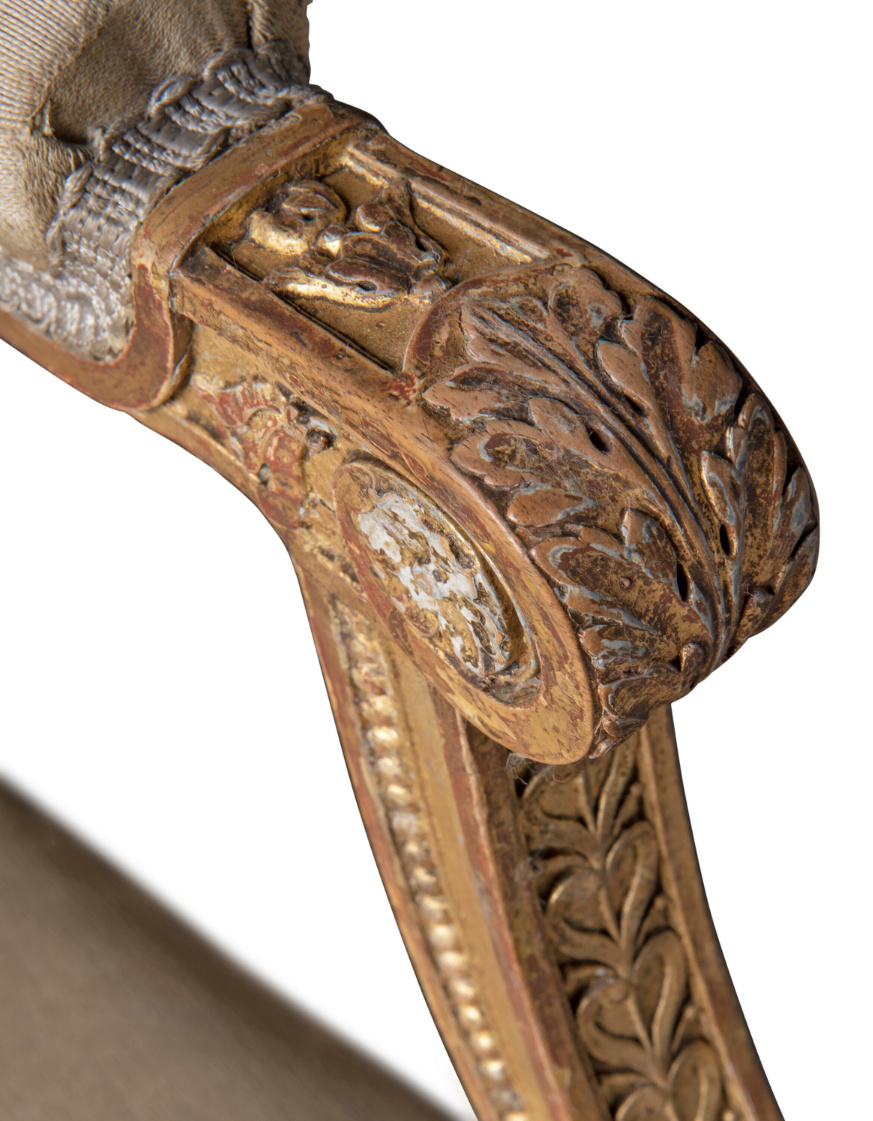 King Louis XVI and Queen Marie-Antoinette were particularly fond of this ‘new’ style and commissioned other related pieces such as a bed made in 1785 by Jean-Baptiste Boulard (1725-1789) for the King’s salle des bains at Compiègne (inv. V899). The most celebrated ‘Etruscan’ commission is perhaps that made in 1785 under the direction of comte d'Angiviller (1730-1810) for the Queen’s dairy at Rambouillet, which included an entire set of mahogany seat-furniture by Georges Jacob (now in the Petit Trianon) and the celebrated service supplied by the Sèvres manufactory. 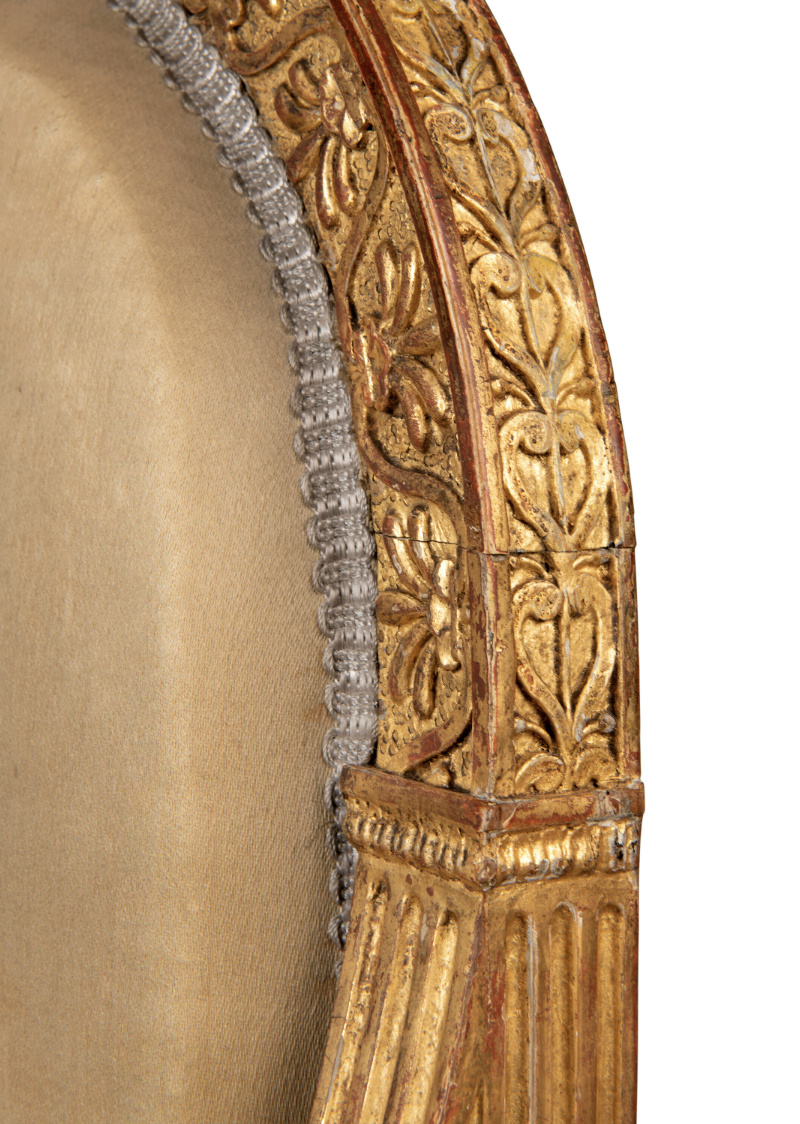 At the outset of the revolution, the royal family’s hasty departure in 1789 meant the Palace retained all its furniture. While there may once have been a question of destroying the Palace of Versailles, the château was in fact saved after the fall of the monarchy in 1792, but the Convention decided to sell its entire contents.
During 1793, the Palace was completely cleared and more than 17,000 lots were dispersed, including the present fauteuil.
On the 13 brumaire An II (3 November 1793), the entire set, described with an upholstery ‘en pou de soie bleu’, was presented but unsold and was subsequently reoffered on the 7 frimaire (27 December 1793) when it was sold for 3000 livres to the Citoyen Dumont from Versailles. 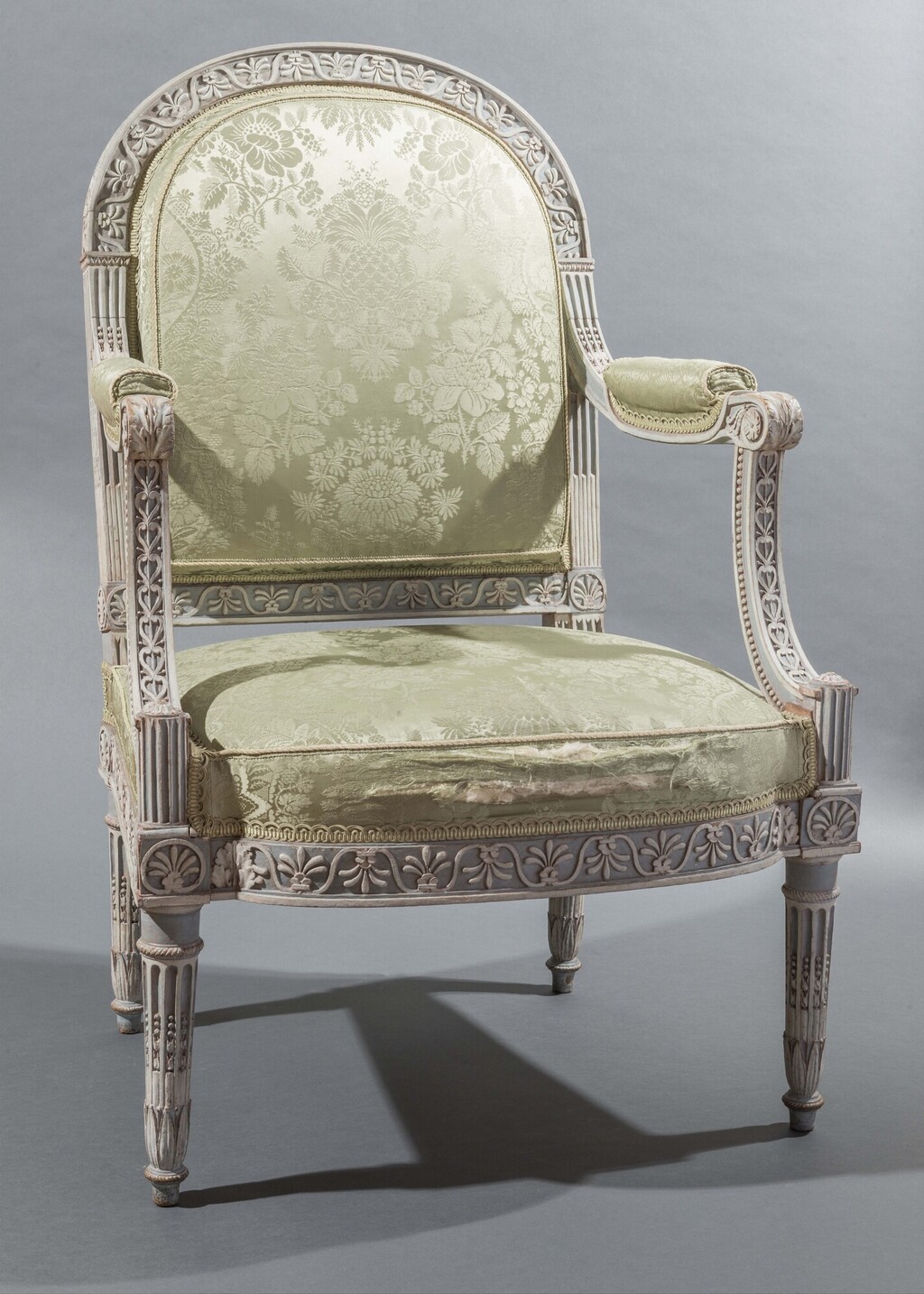 This set was reassembled after successive acquisitions between 1945 and 1987 and was identified by Marguerite Jallut thanks to labels visible on some of the seat-rails inscribed ‘Pour la Reine à Versailles, chambre à coucher’.

The fire screen en suite is now in the collection of M. Jacques Garcia at his château du Champs-de-Bataille.